Before a single line of code is written, testing can begin. Defects are eliminated before they’re hard-coded into the application, where they’re more likely to be missed and far more expensive to fix.

We all know that the sooner defects are found, the easier and less expensive they are to fix. Relying solely on dynamic application testing to find defects isn’t the best or most efficient means to testing. Static testing involves checking documents such as requirements for thoroughness, standard deviations, or completeness. This testing can be done by developers, testers and business analysts during requirements reviews, or by multiple team members in software walkthroughs.

Before a single line of code is written, testing can begin. Defects are eliminated before they’re hard-coded into the application, where they’re more likely to be missed and far more expensive to fix. When requirements gathering begins, testing can begin immediately, without executing any code. At this stage, defects cost nearly nothing to fix, as opposed to waiting until the issues hit the test or production environment. 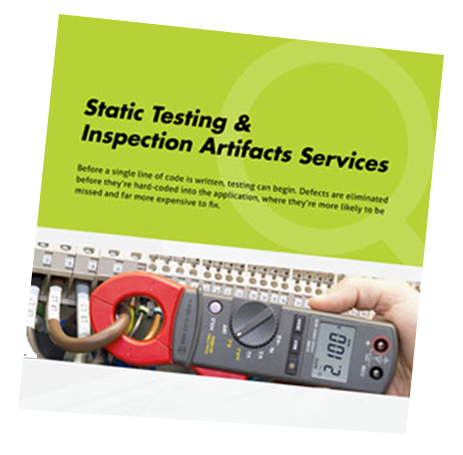 Why should you consider including static testing as part of your SDLC? There are many reasons, and QA Mentor’s Static Testing and Inspection Services can help you realize all of them.

Dynamic testing requires doing in depth test case management, manual and/or automated testing, defect entry, defect fixes, defect re-testing, and regression testing. All of this work is done over long hours by multiple individuals and much of it after the application is built. It’s very expensive and time consuming and causes many managers to question the ROI. While it may be necessary to do this kind of testing, adding static testing into the mix first will reduce the time and effort needed during dynamic testing. It’s much cheaper to have a meeting and identify issues than to let those issues surface months later while executing code. That’s assuming the issues are even found at all. Once they make it to production, the costs multiply even more. Using static testing from the get-go reduces testing costs to a bargain of your previous expenditures.

Nearly half of the defects that dynamic testing identifies could have been found much earlier in static testing. Before code is ever written, defects can be found and fixed. Projects with aggressive deadlines will benefit even more from this type of testing by reducing the time-to-market dramatically. A defect found in dynamic testing can take several hours or even days to fix, while one found in static testing takes a mere hour or less.

With nearly 100% coverage, static testing has proven to be many times more effective than dynamic testing alone.

Maybe you’re sold on the idea of static testing but don’t know exactly where to start? That’s where QA Mentor can step in and help. Our experienced QA professionals can lead the way for your QA organization into shorter testing phases, fewer production defects, and on-budget projects. We can both perform the initial static testing and teach your team members how to do it themselves from then on out.

From the first draft of requirements, static testing starts. Team members review all documentation for thoroughness and appropriateness for the end goal of the product. Both formal and informal reviews are done for all documentation by developers, QA staff, business analysts, and managers. These reviews can be walkthroughs, technical reviews, or formal inspections. For each document type, QA Mentor provides thorough checklists that ensure nothing is missed. We look for document completeness and coverage.

This stage of static testing generally unearths defects involving missing or incomplete requirements, design defects, and inconsistent interface specifications. This stage really doesn’t end until the application coding is complete. After our inspections are complete and all checklists are filled out, we provide you with a comprehensive report with all defects and findings attributed and mapped to a specific verification point within the corresponding checklist document.

What We Usually Find

The primary objective of all static testing is to find errors as early as possible in the SDLC and thereby improve the quality of the end-product. Let QA Mentor help you achieve full test coverage with lower production defect rates, shorter development and testing cycles, and a higher ROI. Call us today, order your free quote and get your team started in static testing!